This is kinda old, I think, but it's pretty great. A rant by Bret Victor on the Future of Interaction Design.

... There's a reason that our fingertips have some of the densest areas of nerve endings on the body. This is how we experience the world close-up. This is how our tools talk to us. The sense of touch is essential to everything that humans have called "work" for millions of years.

Now, take out your favorite Magical And Revolutionary Technology Device. Use it for a bit.

What did you feel? Did it feel glassy? Did it have no connection whatsoever with the task you were performing? ... 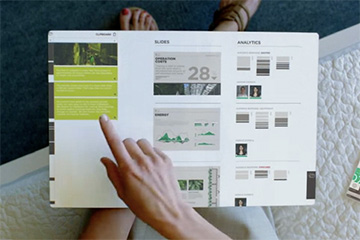 The annual Sunday Times Rich List yields four very important conclusions for the governance of Britain (Report, Weekend, 28 April). It shows that the richest 1,000 persons, just 0.003% of the adult population, increased their wealth over the last three years by £155bn. That is enough for themselves alone to pay off the entire current UK budget deficit and still leave them with £30bn to spare.

Second, this mega-rich elite, containing many of the bankers and hedge fund and private equity operators who caused the financial crash in the first place, have not been made subject to any tax payback whatever commensurate to their gains. Some 77% of the budget deficit is being recouped by public expenditure cuts and benefit cuts, and only 23% is being repaid by tax increases. More than half of the tax increases is accounted for by the VAT rise which hits the poorest hardest. None of the tax increases is specifically aimed at the super-rich.

Third, despite the biggest slump for nearly a century, these 1,000 richest are now sitting on wealth greater even than at the height of the boom just before the crash. Their wealth now amounts to £414bn, equivalent to more than a third of Britain's entire GDP. They include 77 billionaires and 23 others, each possessing more than £750m.

The increase in wealth of this richest 1,000 has been £315bn over the last 15 years. If they were charged capital gains tax on this at the current 28% rate, it would yield £88bn, enough to pay off 70% of the entire deficit. It seems however that Osborne takes the notorious view of the New York heiress, Leonora Helmsley: "Only the little people pay taxes."
Michael Meacher MP
Labour, Oldham West and Royton